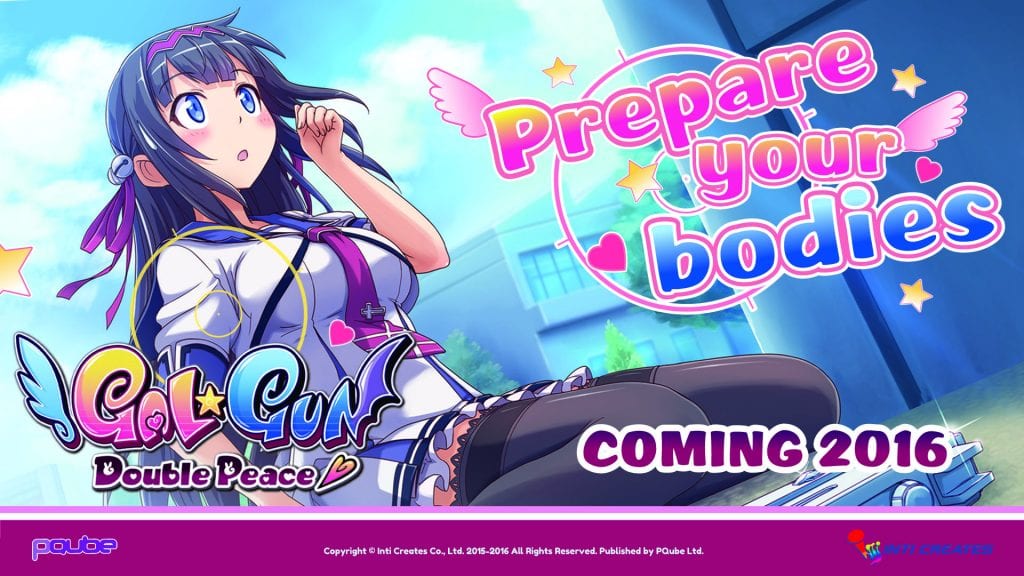 In the closing months of 2015, Inti Creates announced plans to bring Gal*Gun: Double Peace to the international market. In collaboration with UK-based publisher PQube, it has been confirmed that this hyper-moe shooter will be launched on the PlayStation 4 and PlayStation Vita in North America and PAL regions sometime in 2016. This announcement only covers the Gal*Gun sequel, with no word on if or when a localisation project will be undertaken for its predecessor.

When Hodai, the portrait of an uninteresting normal student, is shot by a cupid angel named Ekoro, he becomes immensely popular – in the blink of an eye every girl at the academy becomes insanely hot for him. But being irresistible to the ladies is hardly a dream come true. Every love letter, shout of adulation or advancing kisses will drain his energy. He has to stay strong – because if Hodai doesn’t find his one true love by the end of the day, he will become cursed and destined to be forever alone.

Fend off the other girls by using Hodai’s ‘pheromone shot’, a power granted to him by Ekoro that sends the advancing hordes of girls into fits of ecstasy! Only by keeping them at bay can he find his true love and confess to her.

Gal*Gun: Double Peace is an anime-styled rail-shooter, where you must use your targeting cursor to fend off the swarms of advancing girls. These girls can be found to wear a total of 450 different underwear designs, and can be altered (at least in-part through costume DLC) via the Closet Mode.

Check out my review of the original Gal*Gun HERE.

While stocks of PlayStation 5 are still limited worldwide, those who are fortunate enough to have the new generation console in their home can...
Read more
Video Games

Find yourself logging in to Final Fantasy XIV last night to check out content in the new Patch 5.5, but unable to return to...
Read more
Video Games

In recent Final Fantasy XIV expansions, Square Enix has been strong in delivering not only challenging post-game content for players to work through, but also nostalgic...
Read more