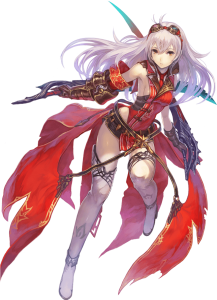 Following their direct handling of the most recent Atelier trilogy and the Surge Concerto series in Western markets, Koei Tecmo Europe/America have announced that they will be bringing a new Gust IP to audiences in 2016: Nights of Azure. This new title has been handled by Keisuke Kikuchi (Fatal Frame, Deception IV), and is set to mark a new, darker, direction for GUST while maintaining some of the gameplay elements that other games by the studio have utilised.

Originally released in Japan this fall under the title ‘Yorunonai Kuni’, Nights of Azure is a tragic epic tale of two friends tangled up in a web of fate and faced with impossible decisions that will test their loyalty to their quest and to each other to the limits.

Set on an uncharted imaginary island kingdom that floats in the North Sea, Nights of Azure paints a picture of a land where nights are tormented by azure-blooded demons. In this kingdom of Ruswal very few people have the strength and the skill to take on the monsters and walk around after the sun has set. One of the best among them is the protagonist, Arnice, a knight of great skill and power. Arnice is assisted by her friend and priestess Lilysse in a quest to rid the land of demons, but she soon finds out that the solution to the island’s problems might not be as simple as defeating enemies in battle.

Expect to hear more on this title in the lead-up to its April 1st 2016 launch on the PlayStation 4.