Ubisoft Australia to Host Charity Livestream for the Starlight Foundation 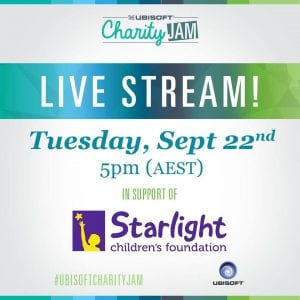 Ubisoft Australia have been supporting the Starlight Foundation for a number of years now, such as in 2013 for example when the company auctioned off a one-of-a-kind canvas painting for Assassin’s Creed IV: Black Flag, which was painted live during the year’s EB Expo. In my opinion the Starlight Foundation is a fantastic charity, providing “Starlight Wishes” for young children and teenagers who are faced with a disability. This is in addition to a range of other activities they organise including family events throughout the year, numerous hospital-based activities and entertainment rooms, and more.

In order to help support the Starlight Foundation, Ubisoft have announced they will be holding a charity Live Twitch Stream for tomorrow. The stream will take place from 5PM to 6PM on September 22nd, and I encourage everyone to get in, have a great hour and hopefully donate what they can. The stream will also feature musician Jordan Sweeto and X-factor star Jayden Rodrigues. A schedule of events can be found HERE, while the Ubisoft Twitch channel can be found HERE.

This is part of a fantastic global initiative by Ubisoft, to get all of their studios and offices from across the world playing games live on Twitch throughout the week for a good cause.