Limited Edition Collection Announced for The Legend of Heroes: Trails of Cold Steel 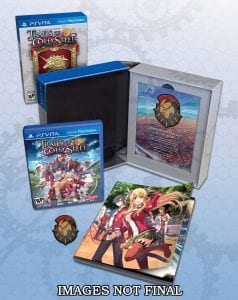 With their release of The Legend of Heroes: Trails of Cold Steel still set for sometime in the upcoming holiday season, XSEED Games have unveiled a special ‘Lionheart Edition’ they will be offering for the upcoming PlayStation 3 and PlayStation Vita JRPG.

This edition will feature an art book, containing over 100 pages of artwork from both Trails of Cold Steel and its sequel Trails of Cold Steel II. Also on offer is a 1.5″ pin displaying the emblem of Erebonia and a custom collectible “clamshell-type” box which will also be able to house the sequel when it is released in 2016. The idea behind the box is that collectors will be able to store the initial Cold Steel duology in one box.

Taking place on the same continent as Trails in the Sky, Trails of Cold Steel is the first game in ‘The Legend of Heroes’ series to explore Erebonian soil, giving players a chance to delve deep into the inner political conflicts of this oft-mentioned and powerful empire. Players take on the role of specially-selected elite military students at a time of great turmoil, enjoying school life and bonding with fellow students to earn new abilities in battle, then utilizing those abilities via speedy, tactical turn-based combat in its new “ARCUS” battle system.

For those in PAL regions, Nippon Ichi Software America will be handling the game. It is currently unconfirmed if they will be offering the same edition.