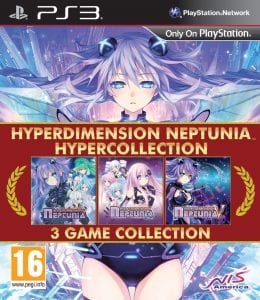 The publisher has today confirmed that a new PlayStation 3 exclusive set entitled “Hyperdimension Neptunia Hypercollection” is now available as a physical-only release. Priced at £39.99/39.99 EUR, this will contain all three games on one disc.

Do note that NONE of the Re;Birth changes to either of the three games will be available in this set.