Attack on Titan: Humanity in Chains – Inglorious Deaths in GIFs 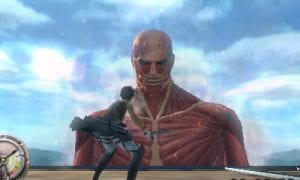 Hoping to highlight what will happen to your characters should your omni-directional mobility gear skills not be up to par, ATLUS USA have this morning shared a handful of GIF animations for Attack on Titan: Humanity in Chains.

These five GIF images, available below, highlight some of the injuries and/or deaths faced by players should they make a few, or possibly one wrong move on the battlefield. As this is an M-rated game, don’t expect the game to be incredibly vague when it comes to your character being killed when battling a Titan.

Developed by Spike Chunsoft and to be published by ATLUS USA in both North America and PAL regions, Attack on Titan: Humanity in Chains is set to hit the Nintendo 3DS from May 2015. This will be a Nintendo eShop exclusive release, with no physical distribution planned at this time.

Based on the popular manga and anime series, Attack on Titan: Humanity in Chains is a download-only title for the Nintendo 3DS. Take on the role of Eren Jaeger, Mikasa Ackermann and other familiar faces from the Scout Regiment to defend the last remnants of humanity. The game has local and online 4-player co-op, and supports the New 3DS XL system’s C-Stick (and the Circle Pad Pro).