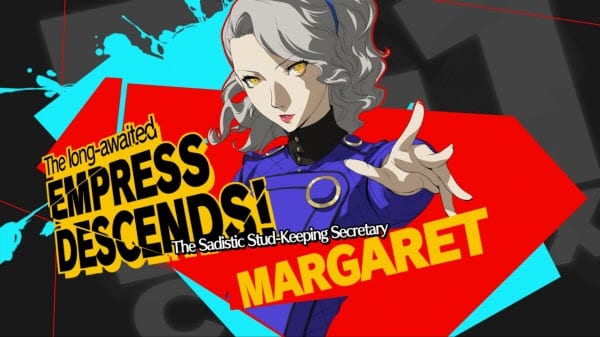 Following the announcement from ATLUS (Japan) that Velvet Room attendant Margaret as a post-launch DLC character for Persona 4 Arena Ultimax, ATLUS USA have confirmed that they will also be localizing and releasing “The Sadistic Stud-Keeping Secretary” in their upcoming North American edition of the game. She’s setting her sights on being queen of the P-1 Climax, and will use her considerable resources to claim that title…resources that include her three Personas, Cu Chulainn, Yoshitsune, and Ardha, and a staggering eight Persona cards.

Unlike Marie and Adachi who will be released as FreeLC for the first week post-launch, Margaret will require a separate purchase, with no free download window. A release date for her character/story has not been confirmed.