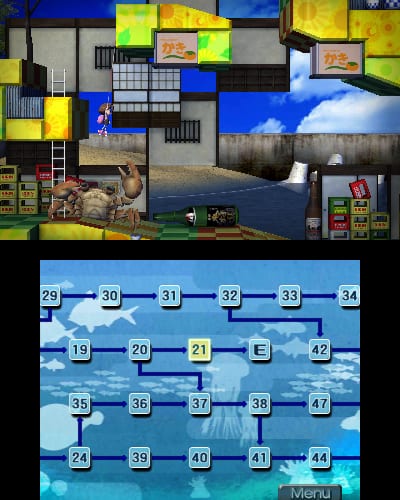 Natsume, whose latest contribution to the international video game industry was Hometown Story, a merger of the concepts present in Harvest Moon and Recettear, have been working towards releasing their next Nintendo 3DS game Yumi’s Odd Odyssey later this month.

Known in Japan as Umihara Kawase, the game features a girl armed with only with her backpack and trusty fishing hook, travelling through a dream-like world filled with fish and other wildlife gone awry.  With puzzling levels, even weirder enemies and mechanics that should be easy to grasp by challenging to master, Natsume hopes that Yumi’s Odd Odyssey will grab you hook, line and thinker. To give you a taste of what to expect, the publisher have shared details on some of the bosses you will go up against during the game:

Players will be first introduced to the boss battle mechanic on Stage 9: A giant tadpole who squashes Yumi with the slightest touch! Yumi will need to use her wits and trusty fishing rod to find places to hide from her massive stomp attack, and her froggie children. It may appear that there’s no way to damage this titanic tadpole, but players who look closely may see a pattern emerge that holds the key…

Later in the game, on Stage 21, players will be introduced to another fiendish foe: the giant crab!  This monstrous menace will try to snap Yumi with its giant claws as soon as she gets close! With the crab’s hard outer shell acting as armor, it will be up to players to figure out how to make crab cakes out of this cantankerous crustacean! Perhaps the key lies in the mysterious boxes scattered throughout the Stage…

There are some big bosses in Yumi’s Odd Odyssey that will offer a real challenge to our players! Besides being big, these bosses also have a few surprising tricks up their sleeve, so you’ll have to use your brain as well as your brawn!