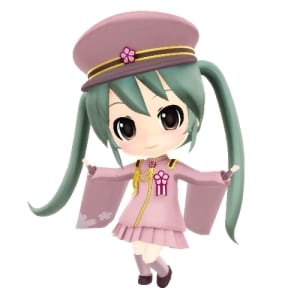 While there remains no word on if Sega will continue picking up installments in the Hatsune Miku video game series following their releases of Project Diva F on the PS3 and (soon on the) Playstation Vita. However the Japanese branch of Sega are powering forward with a sequel to their 2012 Nintendo 3DS title “Hatsune Miku and Future Stars” Project Mirai.

Named simple Hatsune Miku Project Mirai 2, it is set to hit stores in Japan on the 28th November 2013 and will contain new songs, new costumes but the same Nendoroid visual style.

Four new songs have recently been confirmed for inclusion in the game, including

The first three are set to feature Hatsune Miku while the final new announcements focus on Kagamine Len and KAITO. All four will feature new costumes as evidenced in the screenshots below: