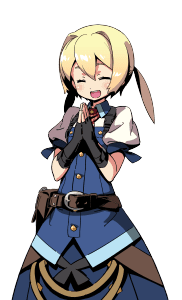 Unlike other installments in the Etrian Odyssey franchise, Etrian Odyssey Untold: The Millennium Girl will offer players the chance to play the game through its usual classic mode or a brand new story mode featuring named characters and actual dialogue. ATLUS USA have so far released all but one character profile / trailer to date…. with the final one released this morning focusing on perhaps the most mysterious character of all… Frederica Irving the Gunner.

Found in an unknown ruin, asleep in a stasis capsule, Frederica doesn’t remember anything about her past or why she was asleep. Every so often, though, seeing something within the Gladsheim facility will trigger a memory, so she’s eager to return to its halls as quickly as she can.

Unlike the rest of the party, Frederica benefits from training in ancient technology, namely firearms. Her ranged fire can lock down an enemy from the back lines with pinpoint shots, crippling its arms, legs, or head. In addition to that, she can also make for a useful backup healer in a pinch.

Her firearms may be ancient, but they sure are effective.