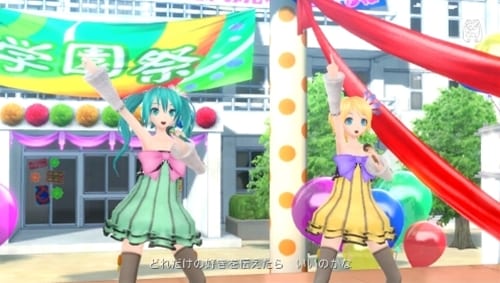 In only a few weeks time many of us will be able to sit down infront of the television and enjoy Hatsune Miku Project Diva F on the Playstation 3 thanks to localization plans announced by Sega a couple of months ago. However given the history of Hatsune Miku games in Japan what we are receiving is only a sliver of the full title set available.

In Japan they are currently working towards two games – Project Mirai 2 for the Nintendo 3DS and what is of focus in the article, Hatsune Miku Project Diva F 2nd for the Playstation 3 and Playstation Vita platforms. While F 2nd is set for release in the first half of 2014, Sega are already taking the opportunity to unveil new songs, attachments (Costumes / Accessories) and screenshots.

In this latest batch of screenshots we take a look at scenes from three newly announced songs for the game (Some entirely new and some that are being remade from earlier installments):

2. Romeo to Cinderella by Doriko

In addition we are given a look at the basic modules for Hatsune Miku, Kagamine Rin, Kagamine Len, Megurine Luka, Kaito and Sakine Meiko who will be starring in the game as well as some additional modules that seem to tie in with the different songs.