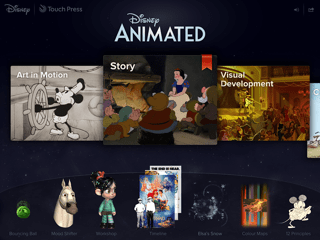 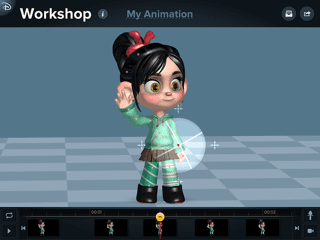 For many decades, children and adults alike have grown up becoming captivated by the creative worlds of Disney. While Disney doesn’t usually shy away from sharing the creative and development processes that go into each of their films, Disney Interactive alongside Touch Press have now released an pp to highlight the magic of their animation.

Disney Animated is a premium app exclusively for the Apple iPad which enables fans at their leisure to explore the story of Disney animation through unique interactive illustrations and authentic animation workshops derived from actual Disney technologies. Disney Animated gives fans what they claim to be “unparalleled access to an astonishing amount” of content, including text, art, sound, images, interviews and interactive activities, spanning all eras of Walt Disney Animation Studios history including those previously unavailable to the public.

Through Disney Animated, fans can immerse themselves in content from all 53 full-length animated feature films from the studio.  From the ability to examine treasured artifacts and intricate artwork to an exclusive first look at footage, concept art, animation tests and visual effects from the upcoming film Frozen – Disney Animated is hopefully set to allow fan the opportunity to discover the animation process through hands-on interactive activities adapted from the actual tools Disney animators use.

At Disney Interactive we are committed to building new, high-quality storytelling experiences that leverage digital technologies and platforms. Through the power of the iPad, we are bringing fans closer than ever to their favorite Walt Disney Animation Studio films and the art and technology of making those films.  Disney Animated represents a rare moment when innovation, technology and art converge to create an experience that is entirely new.

Walt Disney Animation Studios’ top animators, artists and technicians brought their expertise to this app to help create an incredibly authentic experience which represents our studio’s rich legacy. We’re excited to show the world the art and technology behind how we make our films and inspire the next generation of animators.

The world of Disney animation is amazingly rich and deep.  The more you look into it, the more surprising and delightful it becomes. We rethought from the ground up how this story should be told, now that we can tell it with words, pictures, clips, sounds, and interactive workshops that let you apply what you’ve learned.

Of course with a scope of what seems to be almost the entire Disney catalogue of films this app does not come cheap. In Australia this will set you back $14.99 via the official App Store while in New Zealand it will cost $17.99. For this price they claim you will get:

The Story of Animation
How Disney animated films are brought to life, from early concept and story development through layout and background, animation, visual effects, sound and music and final assembly – with every illustration on every page touchable and interactive, including the ability to peel back the layers of animated scenes to reveal work-in-progress animation steps and visual effects layers.

Disney Animation History in One Place
A comprehensive timeline of all 53 animated feature films from Walt Disney Animation Studios, including animated clips of favorite characters and recently uncovered historic trailers.

Unprecedented Access
Disney Animated contains over 750 interactive illustrations, including more than  400 short animation clips, over  350 high-quality images from Disney’s archives, including backgrounds, concept art, character sketches, and super-zoomable storyboards, 3D rotational photography of rare artifacts like the maquette of Hyacinth, the dancing hippo from Fantasia, and a unique Color Map that displays a sophisticated color summary and thumbnail frames from every scene from every one of Walt Disney Animation Studios’ 52 released feature films in a single iPad image.