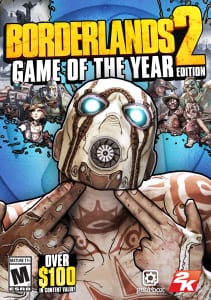 2K Games alongside Gearbox Software have confirmed that they will be bringing Borderlands 2 Game of the Year Edition on PC, Playstation 3 and Xbox360 as of the 8th October 2013. With the Borderlands 2 Season Pass now done and dusted, they have chosen now to be the best time to package the game with all the associated DLC content at a reduced price.

For us and for fans, the love for Borderlands 2 has been nothing short of spectacular, so it’s natural for us here at Gearbox Software to want everyone else to have a chance to experience the best-selling game and its most valuable expansion content. The Borderlands 2 Game of the Year Edition offers more value than ever before in one package, giving everyone an opportunity to become a legendary Vault Hunter, and join in the award winning mayhem and fun.

The success of Borderlands 2 has been tremendous, and the game is on-track to become the highest-selling title in the history of 2K. With the Game of the Year Edition releasing this fall, fans will have the opportunity to get their hands on the most comprehensive Borderlands 2 bundle at an incredible price.

The Game of the Year Edition reportedly contains over $100 of gameplay content at a recommended retail price of $59.99. Contents include