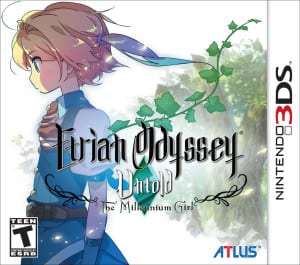 During E3 2013, ATLUS USA announced that they had plans to release the latest installment in the Etrian Odyssey franchise Etrian Odyssey Untold: The Millennium Girl. More than a month has now passed and after being pretty quite on this title, the company have come forward and announced that release is already within sights.

Available on the 1st October 2013, Etrian Odyssey Untold: The Millennium Girl is the first non-numbered installment in the game series with a few unique features up its belt. The game is told in two parts, a first for the series. The first part is a story-driven first person adventure into the world of Etria. Appropriate for players new to the series and veterans alike, the Story mode gives players five pre-made characters, each with their own personalities and dialogue to explore a side of Etria not seen in the first game. Adventurers must brave new dungeon layouts, floors, and enemies to find out the truth of the Yggdrasil Tree and the mysterious girl, Frederica. For series veterans, Classic mode offers the traditional Etrian Odyssey gameplay, updated to the latest conveniences found in Etrian Odyssey IV, including full 3-D graphics. The game also includes animated opening and story cutscenes by Madhouse and voiceovers for the story and battle scenes, plus the option for orchestrated background music.

Available at both retail and the Nintendo eShop, Etrian Odyssey Untold will be purchasable on the same day for $39.99.