Back in late April 2013, the publisher of English localized indie games Nyu Media launched a Kickstarter Campaign for The Tale of ALLTYNEX with a modest target of $4,999… which saw almost triple its goal pledged. This time around the company have chosen to go with Indiegogo…. and have a much more ambitious campaign up their sleeves.

This time Nyu Media have chosen to localize Yatagarasu Attack on Cataclysm, a title that has supposedly been the labor of love for three former SNK / King of Fighters staff for the past six years – and with this campaign they hope to raise the funding to add new characters, a host of new features, ptroduce an arcade version (Just for Japan at the moment) and of course fully localize and release the game around the world. 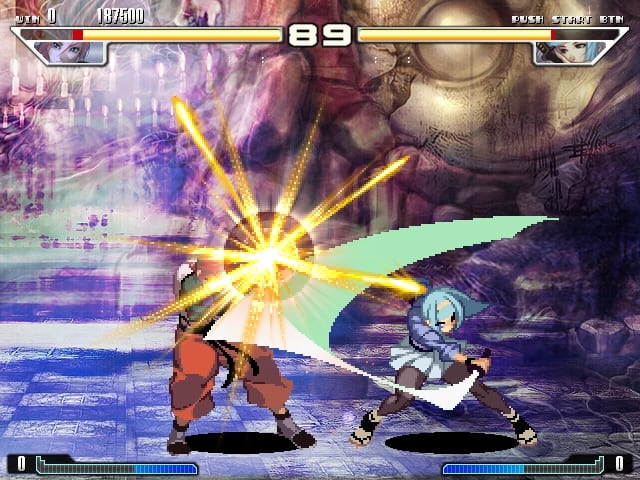 Yatagarasu is an original 2D fighting game for Windows PC that takes inspiration from Street Fighter III: Third Strike, but incorporates play elements similar to BlazBlue. The game features eight playable characters, high quality old school graphics, and gameplay that genuinely is easily accessible to anyone, but offers depth to veteran fighting game players. It also features a dynamic commentary system: voiceover by celebrity fighting game commentators will cheer you on or put you down based on your play and what’s happening in the game!

If the team release their goal, they have mentioned the following new additions to the game:

For more info and a look at all the pledge goodies available, click HERE.