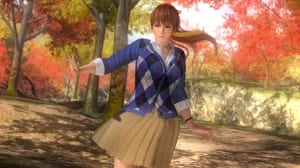 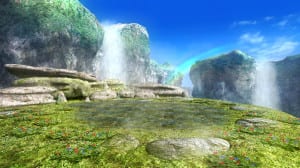 Tecmo Koei and Team Ninja have unveiled further details on Dead or Alive 5 Ultimate, the latest installment in the series recently announced by the companies for release on both Playstation 3 and XBox360 entertainment systems later this month. These details pertain to two new stages you will be able to have your fighters brawl in, the Lost World (Pictured to the right) and the Forest (Pictured to the left).

In the Lost World, high above the clouds a battle rages atop a steep vertical stone cliff, with raging waterfalls flowing in the distance. Of course, looks can be deceiving and players are being asked to be wary of the hazardous areas of narrow footing and massive stone pillars that riddle the area, and can cause extra damage against you – or in turn your opponent. The second stage – featuring a more generic Forest takes fighters into the Autumn season, in a dense forest replete with hues of the seasonal foliage. Battles take place along a single road, that gets increasingly steep as the fighters approach the mountain, and where elevation should be an integral part of your strategy.