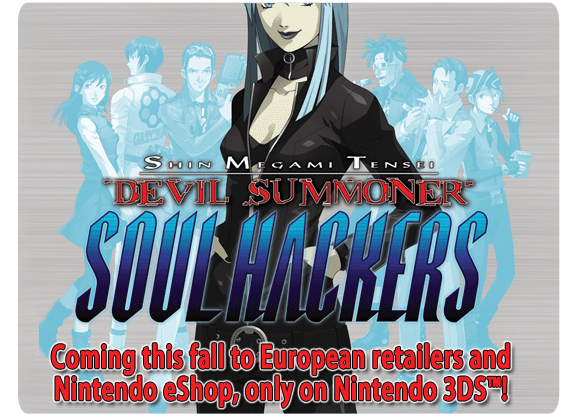 While our go-to company for everything Shin Megami Tensei titles in PAL regions was Ghostlight, especially over the last few months it seems that both them and Nippon Ichi Software America are sharing the different titles in the series. The company have today announced that Shin Megami Tensei: Devil Summoner: Soul Hackers, the latest Megami Tensei game to hit store shelves in North America will be released in PAL regions (Hopefully including Oceania) during the Fall 2013 gaming season.

As with the North American and Japanese releases, the game will be exclusive to the Nintendo 3DS video game console.

Soul Hackers is a first-person, dungeon-crawling RPG experience set in a future where technology and otherworldly forces meet in a macabre fusion of cyberpunk and gothic horror. Soul Hackers tells the story of Amami City, a beacon of humanity’s triumph of technology, but with an infernal secret. In this would-be utopia, a group of hackers takes on a centuries-old mystic society, and battles for control over humanity’s fate.