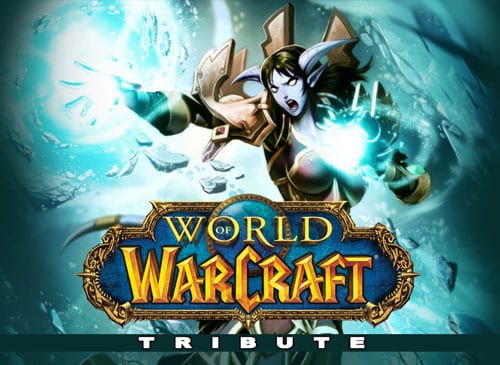 At their New York Comic Con panel, Udon Entertainment announced they are teaming up with Blizzard Entertainment to produce the next installment in their ‘Tribute’ series of deluxe art books – Aka. World of Warcraft: Tribute. This artbook is set to offer potentially hundreds of professional and hobby artists the opportunity to showcase their artistic chops and pay homage to their favorite characters, settings, moments and lore from Blizzard’s long running MMORPG World of Warcraft.

But this is a tribute book…. so don’t just expect the artists involved in the game to fill its pages! Beginning November 1, artists from around the world are invited to submit their original, World of Warcraft–inspired artwork for consideration to be included in this collection. Udon Entertainment’s previous ‘Tribute’ books have served as a “Who’s Who” of international comic, concept, game, and fan artists, and WORLD OF WARCRAFT TRIBUTE will continue that tradition by collecting imaginative takes on Blizzard’s game world—from anime and western comic styles to cartoons, pixel-based art, sculptures, and more—whatever medium the artist chooses to express their unique vision of the Warcraft universe.

Blizzard and Udon Entertainment will select the most epic and impressive submissions to be included in World of Warcraft: Tribute, which will premiere as a special limited-edition hardcover book at San Diego Comic-Con 2013. With thousands of entries expected, submitting artists are encouraged to bring their “A” game if they aspire to have their work included in the collection.

We couldn’t be more excited about this project. We really respect the amazing universe Blizzard has created with the Warcraft series, and the games have been a major source of inspiration to the artistic community for years. This book will be our biggest Tribute undertaking ever, and we’re already anticipating all of the amazing illustrations that will soon be headed our way.

We’ve always been humbled by the fact that some amazing artists out there have drawn inspiration from our games over the years. Deciding which pieces to include in this book will be a huge challenge, but we’re looking forward to working with UDON to select the best of the best and put together an epic collection. And who knows — maybe in the process, we’ll discover some great new artists to invite to work with us on future Blizzard games.