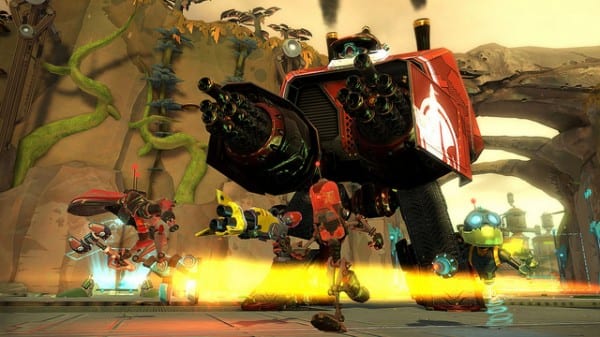 The celebrate next month being the 10th Anniversary of the Ratchet & Clank series, James Stevenson from Insomniac Games has announced that the next game in the series ‘Ratchet & Clank: Full Frontal Assault’ will be available on the 27th November 2012 via both the Playstation Store and retail. The game was originally slated for release on the Playstation Store, but this has changed due to requests from fans:

Both the digital and retail copies of the games will support cross-buy, so buying the game for the Playstation 3 will also net you a digital copy of the game on the Playstation Vita. In addition, as the game is set to be a fun sized project similar in scope to Ratchet & Clank Future: Quest for Booty, they have announced that the game will set you back $19.99.

The other big question we’ve gotten a lot is “How much will the game cost?” As you know, Full Frontal Assault is a “fun-size” project that’s similar in scope to Ratchet & Clank Future: Quest for Booty. But Full Frontal is actually bigger than Booty (sorry, couldn’t resist), as we’ve added tons of new features, including the new base assault and defense elements. An even bigger addition to Full Frontal Assault is the replay value we packed in with online / split-screen co-op, and online competitive modes. Most importantly, while the experience itself may be more condensed, the game quality is bursting at the seams. We’re very proud of what we’ve created.