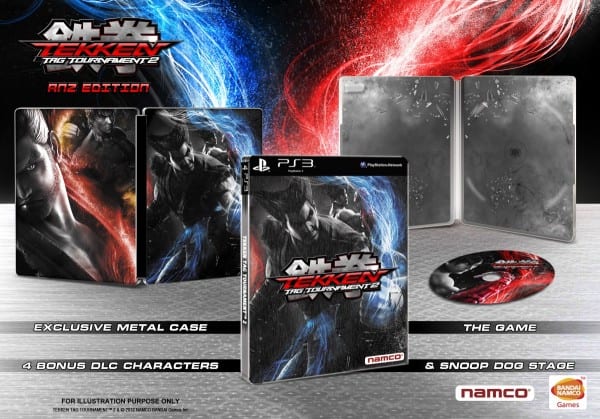 Namco Bandai Partners today announced Tekken Tag Tournament 2: ANZ Edition, the next installment in the fighting game franchise will be available to retailers worldwide on the week of the 10th September 2012 for both the Playstation 3 and XBox360 home video-game consoles. This release will boast the largest roster of fighters in Tekken history, and fighting game fans who pre-order the game at select retailers can look forward to playing with four additional DLC characters – Michelle Chang, Angel, Kunimitsu and Ancient Ogre.

On day one of Tekken Tag Tournament 2’s launch, fans that placed their pre-orders with selected retailers will have access to the exclusive ANZ Edition, which includes a high quality Metal Tin case with exclusive artwork, the additional four DLC characters and the Snoop Dog Background stage. The ANZ Edition will be produced in limited quantities and available through EB Games and JB Hifi in Australia and New Zealand.

TEKKEN shattered fighting game genre barriers when it unveiled tag based combat with the release of TEKKEN TAG TOURNAMENT in 1999. TEKKEN TAG TOURNAMENT 2 continues to break boundaries with the introduction of the new Fight Lab mode, where players can customize the moves and appearance of new training character, Combot. Players that clear the innovative Fight Lab will have mastered the complexities of TEKKEN and own their own customized Combot, which can be used in offline and non-ranked online play.

In addition to this, one-on-one fighting and solo fighter vs. tag-team battles have been added to enhance the range of gameplay options for seasoned TEKKEN fans while providing an easier point of access to new players. TEKKEN TAG TOURNAMENT 2 also includes Pair Play, where up to four players can each control a character in the ultimate team battle.