MangaGamer Announce Addition of Nyu Media Games to their Store

MangaGamer have today announced that they will be adding the addition of two of Nyu Media’s releases to their online store starting from today. These are the eXceed Collection and Cherry Tree High Comedy Club, two very different style of games. I actually have copies of both which I intended on reviewing – but due to my thesis being in the works I have been unable to review them…. so if you want more information on these I will try and have reviews up this weekend or early next week. Purchases can be made through the MangaGamer website HERE, for more information on Nyu Media titles visit HERE.

The eXceed Collection is a collection of three bullet hell games, each of which are described below: 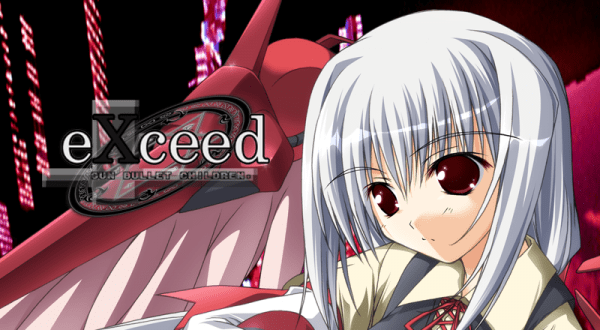 Humanity is at war against vampires and deviants. Mankind’s last line of defense is a group of children trained to wield powerful magic that can rival the demonic hordes, but at the cost of most of their lifespan. Likened to bullets of a gun, they are known as the ‘Gun Bullet Children’.

The time is NOW! A vampire invasion force has been detected in the airspace above Tokyo Portal 5. Preliminary reports indicate over 500 vampires and accompanying Killings Dolls with reinforcing hordes of deviant humans. The first line of defenses has been obliterated and the Gun Bullet Children are scrambled to launch a counter-assault and stop the invasion. 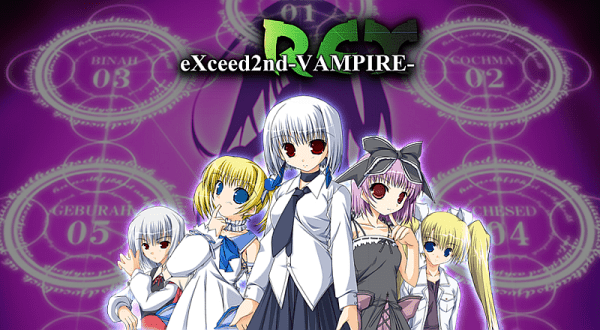 The human powers-that-be called for the purification of mankind and the eradication of vampires and ‘deviants bloodlines’ – those born of a mix of human and vampire. And so began massive purges of the deviants that were reminiscent of the “witch hunts” of centuries earlier. Leading the genocide was the exorcist corps the “Gun Bullet Children”.
As the overwhelmingly large human armies began to obliterate every vampire and deviant community across the world, the opposing deviant armies sought to gather allies and rally back. Ria Fyle is a half-human, half-vampire girl fighting on the side of the deviants as they embark upon a turnaround strategy, the “Siege on the Holy Land’. Their plan: to lay siege upon the humans’ “Holy Land” and to destroy the Holy Lady Anhel who was the source of the human military power. This is a battle in which defeat is an option for neither army.

Featuring the renowned and addictive polarity-based gameplay system, this amazing vertical shmup is sure to please any shooter fan. The polarity and color of your character can be changed to absorb enemy bullets of the same polarity while charging the special weapon in the process and doing double damage to enemies of the opposite polarity. Every bullet absorbed charges your special weapon for total destruction. With awesome music, beautiful art, and challenging stages, this is the game that put the eXceed series on the map and has everything you would want from a shmup. 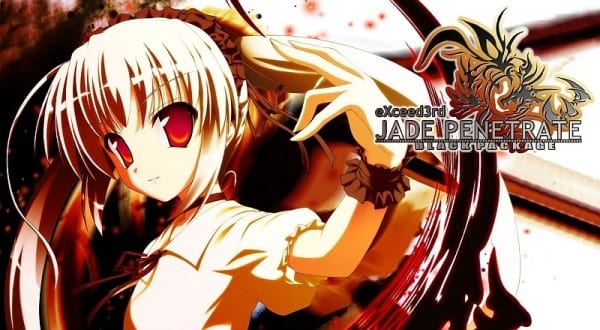 eXceed 3rd reboots the eXceed storyline, taking it in a new direction. In this installment, Rayne Lindwurm, a descendent of the Dragon Clan, fights her way through a tournament to become one of the 7 Cardinal Lords who rule her world, Pandemonium. Standing in her way are other competitors and their familiars, including her own older sister and heiress to the mighty Dragon Clan, Celestia Lindwurm.

Rayne must use her Mini-Tiamats, bombs, and the Burn Air Raid homing special attack to fight her way through the tournament and win a seat as a Cardinal Lord. Also featuring a slowdown feature for precise maneuvering through “bullet curtains”, multiple scoring multipliers, localized cut scenes, and memorable bosses, you’ll be driven to help Rayne in her journey to power. 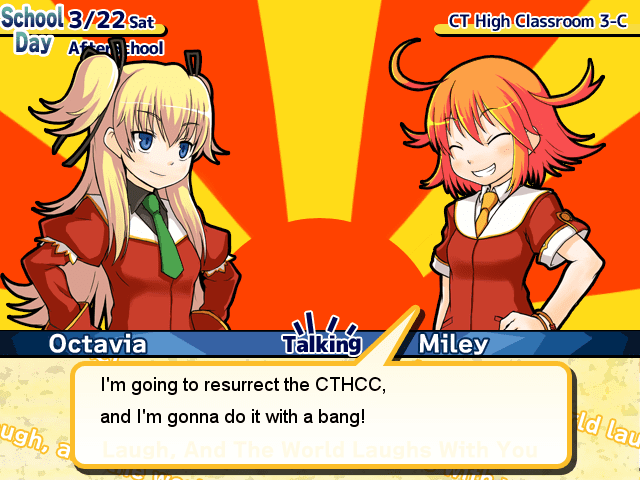 On the other hand, the other title Cherry Tree High Comedy Club is more in line with what MangaGamer release themselves – visual novel in style with a few interactive features translated from an original Japanese release.

Comedy fanatic and high school student Miley Verisse has decided to set up a comedy club in her school, but her nemesis and the head of the student council, Octavia Richmond, isn’t about to make things easy… The school rules require a minimum of 5 students to set up a new club and Miley is 3 people short! Spring break has just started and Miley has until the end of April to recruit the 3 new members she needs to start the club or Octavia will have the last laugh!

Guide Miley through idyllic Cherry Tree Town as she makes new friends and endeavors to persuade them to join her high school comedy club in this anime-style comic adventure game.

Explore the town and level up Miley’s repertoire of conversational topics by performing different activities such as reading books, watching TV, and visiting the art gallery, then apply those skills to persuade potential recruits to join your new club. Some skills require money to level up, so you will need to find part time jobs such as cleaning the local temple, picking up discarded bottles and making jewelry accessories.

Developed by doujin circle 773 (“Nanami)”, Cherry Tree High Comedy Club features a host of quirky characters, catchy music, and is a must-play for fans of anime and manga!

Laugh and the world laughs with you!