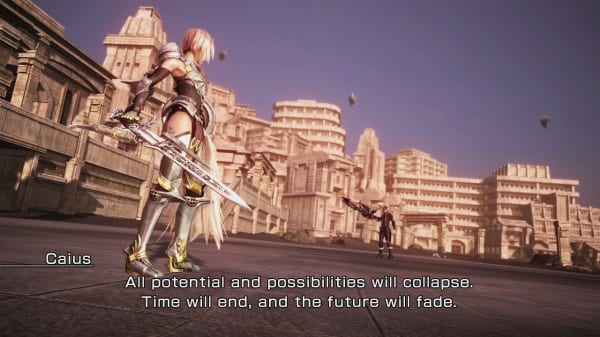 After numerous DLC releases since release, many of which have given us a small storyline from the perspective of another character, provided us with new costumes for Noel and Serah or otherwise allowed us to recruit characters from the series…. it seems like Square Enix is putting a close to the releases in Final Fantasy XIII-2 and leaving the “To Be Continued…” at the end of the game to most probably be followed on into another game.

For this final set of content – they are set to go out with a big pile of content including:

Snow’s Story: Perpetual Battlefield: Snow is engaged in battles at the Coliseum after being separated from his fiancée, Serah. The episode also features a battle against the “Arbiter of Time,” who has been watching events unfold at the Coliseum. Snow should pose a difficult challenge to players and will allow them to end the Coliseum battles on a high note, and ultimately unlock Snow as a party member.

Lightning’s Story: Requiem of the Goddess: This DLC reveals the arduous battle between Lightning and Caius not shown in the main game. Players will be able to adjust the difficulty level and play as Lightning, who uses special abilities available only in this episode. Players will also be able to unlock the FINAL FANTASY XIII-2 version of Lightning as a party member. Because the episode includes important information relating to the overall storyline of FINAL FANTASY XIII-2, players are encouraged to complete the game prior to playing through this new content.

White and Black Mage Outfits: For Serah and Noel respectively

A Wondrous Wardrobe: 16 different costumes for Mog, the Moogle!

None of these are free, and will come attached with the following prices for the XBox Live Marketplace and Playstation Network:

“A Wondrous Wardrobe” outfits for Mog: 240 Microsoft Points, $2.99 via PlayStation®Network