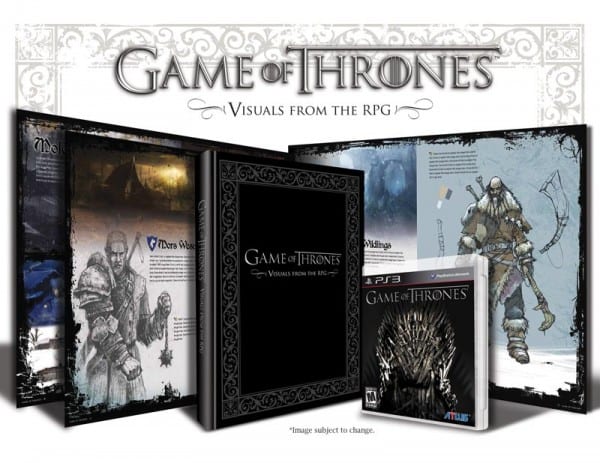 ATLUS USA, a North American company who is behind distribution of games to the English market have today unveiled the full colour, hardcover art book for their upcoming release of the Game of Thrones RPG which will be available with pre-orders for a limited time at select retailers. This book will be loaded with concept art, developers notes, renders, sketches over the sixty-four pages and what is they are calling the “ultimate complement to the upcoming video game and the perfect bonus for fans of the books and TV series“. The book will also include rare behind-the-scenes materials like a portrait of the development team signed with a special message from author George R. R. Martin himself.

The game, due for release on each the Playstation 3, PC and the XBox360 gaming consoles is a collaboration project with Cyanide Studios and is based on the internationally bestselling book series “A Song of Ice and Fire” by George R. R. Martin and the HBO television series “Game of Thrones“. Tim Pivnicny, Vice President of Sales and Marketing at ATLUS had this to say on the matter:

Game of Thrones: Visuals from the RPG’ represents one of the most elaborate, expensive bonuses we have ever offered. Everything about this premium art book is above and beyond the typical pre-order bonus, and all at no additional cost to the customer.  Its larger dimensions, page count, hardcover binding, and exceptional print quality are more in line with what fans would expect from a Deluxe Edition extra or a separate purchase, which is why it will only be available at select retailers and quantities will be extremely limited.  The A Song of Ice and Fireseries of books and the Game of Thrones TV series are as special to us as they are to the millions of fans around the world; we are thrilled we can offer this unique bonus to complement the first major video game release based on the franchise.”

The games official release date is currently scheduled for the 15th May 2012 for each console, with the hardcover book titled “Game of Thrones: Visuals from the RPG” will be available in limited quantities from Amazon US, Amazon Canada, GameStop, EB Games and the HBO Shop. While I own a sizable collection of novels, I have never read the series even after hearing of this games development… so I have no comment on its plot and potential for a novel/TV –> Game port.