As With FF XIII-2, Kingdom Hearts 3D to Include Recap “Memoir” System 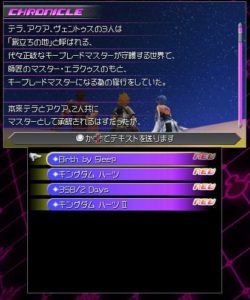 When Square Enix released Final Fantasy XIII-2 to the market, they included a handy little recap menu which let you read a summary chapter by chapter of the original installment in the series Final Fantasy XIII. However this was just one game that was released over two years ago… the Kingdom Hearts franchise began almost 10 years ago and has since then spread itself over four consoles with numerous games.

As it is questionable as to if every fan of the franchise has played every single game, Square Enix mentioned on their game’s blog that the game would be including a Memoir system which allows you to have access to tutorials, options and more importantly – the option to get up to speed with what has happened in previous games with summaries.

The game is due for release at the end of March 2012 in Japan, with an English localization already announced for release near the end of the year by Square Enix and Namco Bandai Partners (Australia and New Zealand). Kingdom Hearts 3D: Dream Drop Distance is the next offering in the Kingdom Hearts series exclusively for the Nintendo 3DS.