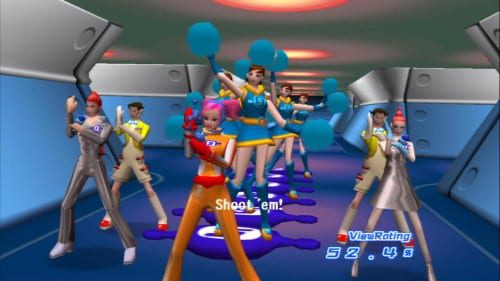 Whilst both of these games were included in a Dreamcast Collection for both PC and XBox360 earlier this year, SEGA have recently announced that they have made both Space Channel 5 Part 2 and SEGA Bass Fishing available on both Playstation Network and XBox Live stores for you to download. You can pick up copies of these games for 800 Microsoft Points or AUS$12.95. For those not familiar with either of these games, here are blurbs for both:

In SEGA Bass Fishing, players can cast their lines at eight different fishing holes, utilising 14 unique lures while battling realistic weather conditions that affect fish behavior. Players also have the opportunity to master their angling techniques to catch as many fish as possible in four tournaments, where the best of the best cross fishing rods! In addition, exclusive to the PlayStation®3system, you’ll be able to get that realistic fishing experience right in your living room with the PlayStation®Move motion controller. Cast off and reel in with a simple flick of the wrist.

In Space Channel 5 Part 2, follow Ulala, a dancer and reporter from Space Channel 5, on her quest to take down the Rhythm Rogues and their leaders, Purge and Shadow. The dancing Dreamcast diva must prevent them from creating the all-powerful dance-control weapon and ultimately end their pursuit of world domination. Along the way, enlist the help of Space Michael, based on the King of Pop himself, to prove Ulala’s prowess in rhythm and rescue Space President Peace!

and for those who are curious, there is still no word on if there will ever be a HD release of Space Channel 5 Part 1…