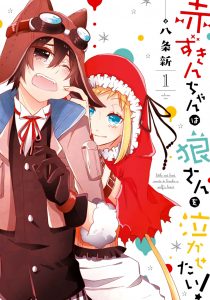 Continuing to build upon their ever-growing library of manga titles, Seven Seas Entertainment have announced they have acquired rights to the on-going shoujo manga series, Red Riding Hood and the Big Sad Wolf, by Hachijou Shin.

While based on the classic story Little Red Riding Hood, this manga sets out to be a cheeky take on the tale, aimed at those for fans of Alice in the Country of and Dictatorial Grimoire. This reinvention of the tale reverses the roles of the original, giving readers a lovable cry-baby Wolf and an ongoing Red Riding Hood who just can’t help but want to tease him.

Red Riding Hood and the Big Sad Wolf will be released as single-volume collections, with each volume also set to include at least one full-colour illustration among its pages. Volume 1 will be available on June 13 2017 for $12.99 USD or $14.99 CAN.

About Red Riding Hood and the Big Sad Wolf

Once upon a time there lived a kind, sensitive Wolf. He loved the warm sun, the beautiful flowers, and the song of the birds. But one day the Wolf encountered a girl in a red hood. She delighted in making the Wolf cry, and immediately fell in love with his sorrowful face. Now she brings her colorful friends to torment him every day! What is the story behind all the strange characters populating the deep dark wood, and what is a big, sad wolf to do?

As the years go by, the variety of manga offered by publishers outside of Japan has increased. This growth is not only...
Read more
Manga

Excited about checking out new manga and light novel offerings due to be available in English next year? Over the last few...
Read more