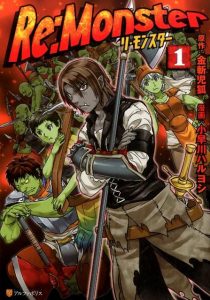 North American manga publisher Seven Seas Entertainment have announced they have licensed the fantasy manga series Re:Monster – written by Kanekiru Kogitsune and illustrated by Kobayakawa Haruyoshi. Further adapted from the original light novel, Re:Monster is the newest tale of reincarnation and survival in another world. But starting out differently compared to other series, the protagonist begins his life anew as a goblin.

Tomokui Kanata has suffered an early death, but his adventures are far from over. He is reborn into a fantastical world of swords and magic– as a lowly goblin! Not content to let this stop him, the now renamed “Rou” uses his new physical abilities and his old memories to plow ahead in a world where consuming other creatures allows him to acquire their strengths and powers.

Re:Monster falls into the increasingly popular category of a hero reborn into an RPG-like world. Much like Mushoku Tensei, Overlord, or Sword Art Online, a young man is transported into a fantasy world to begin a new life, but in Re:Monster, he’s reborn as a goblin—a very, very hungry goblin. With strong artwork and a unique story, it’s sure to be a winner.