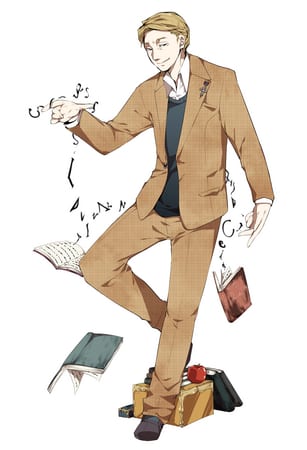 American author Dan Brown who is renown around the world for novels such as The Da Vinci Code and Angels and Demons has been confirmed to soon be immortalized in manga form. His likeness and name is to be featured in the manga series Bungou Stray Dogs / Literary Stray Dogs (文豪ストレイドッグス) – and as with other characters in the series would to some degree be taking on a role as what you could call a “Literary Magical Boy”.

The concept for the series surrounds worldwide literary figures who have magical powers. Dan Brown will have an ability known as “Inferno”, which will allow him to compose a three-line piece of text that offers a look into “Hell” – or more specifically a look into what will take place 33 minutes in the future. However staying true to what some might consider his novels to be like, the text he composes will be indecipherable to all but himself. This is due to the historical and religious content included in everything produced by his ability.

When commenting on his inclusion, Dan Brown had this to say: “I’ve always wanted to be Mangafied (いつもマンガにしてほしいと思ってたんだよw)”.

At this point in time, there is no international publisher for the manga series.