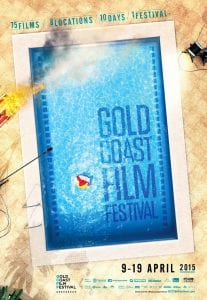 After almost a year of waiting, film fans living in or around the Gold Coast, Queensland will be able to descend upon The Arts Centre Gold Coast for another ten days of films, seminars, Q&A’s with production team members / celebrities (Including the legendary George Takei) and more.

The festival is set to kick off tomorrow (April 9 2015) evening with the red carpet opening night screening of Clouds of Sils Maria, serving as the film’s Queensland premiere. Tickets to this screening are still available via The Arts Centre Gold Coast official website for $20.00 apiece.

The opening night will be followed by multiple events and screenings almost daily, which include: free community screenings, paid feature films, special events such as the Women in Film Luncheon and numerous Reel Life seminars targetted towards those interested at getting into film-making or are currently in the industry themselves and looking for experienced insight.

The Otaku’s Study is happy to once again be covering this event, and look forward to providing readers with news and reviews from the event over the next few weeks. Take a look at the Gold Coast Film Festival website for more information on individual screenings and events.