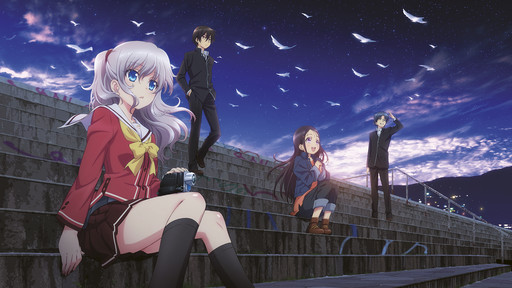 2015 TV anime Charlotte, produced by P.A. Works and Aniplex, is a 13 episode series directed by Yoshiyuki Asai and written by Jun Maeda. Between them, this pair has been the minds between emotional rollercoaster visual novels and anime such as Angel Beats!, Little Busters! and Clannad. Therefore, if you are new to the show, you should immediately know what to expect.

Kicking off the new year, Australian anime publisher Madman Entertainment has announced that Charlotte is now available to stream, English dubbed, via their AnimeLab video-on-demand service today. Previously available, viewers will also be able to watch the show with the original Japanese audio w/ English subtitles.

Set in another high school with supernatural elements afoot, Charlotte is set in a world in which the onset of puberty in a very small number of boys and girls brings forth special abilities. Yu Otosaka has one such ability and he uses his power to live a fairly normal, average school life. Suddenly in front of Yu a girl named Nao Tomori appeared and due to this chance meeting, the fate of special power-users will be exposed.

If you are a free subscriber to AnimeLab, you can watch all episodes with the original Japanese audio. The English dub, however, will only be accessible by those with a premium membership. Either way, begin watching this amazing show by clicking HERE.

GKIDS is most known for their work in bringing some of the world's iconic...

Over this weekend, North American anime publisher Sentai (Aka. Sentai Filmworks) has announced their...

Releasing in select cinemas across the country from 26 August 2021, Australian anime publisher...

There are so many anime series out there that focus on cute girls doing...
Previous articleNew Anime From Madman Entertainment in January 2021
Next articleAwesome Games Done Quick (AGDQ) 2021 Commences Virtually This Weekend – Full Schedule Released
Twitter Youtube
© The Otaku's Study