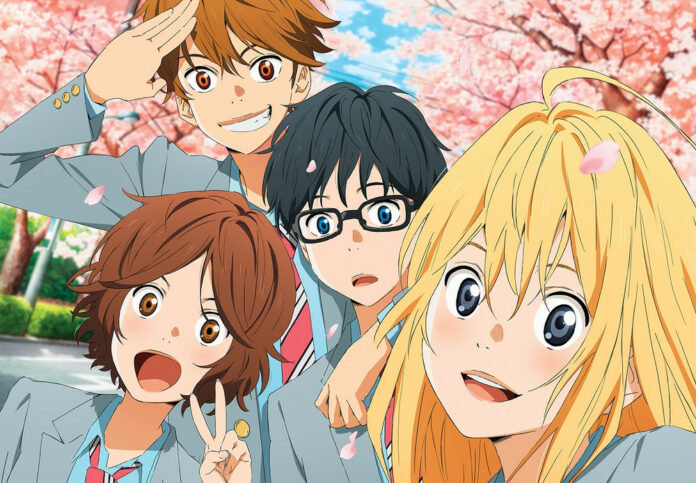 The 2014 coming-of-age TV anime Your Lie in April (Aka. Shigatsu wa Kimi no Uso – 四月は君の嘘) is due to receive another home video release by year’s end, with Aniplex of America confirming plans to offer a complete Blu-ray set on 22 December 2020. All 22-episodes of the heartwarming series will be offered on six Blu-ray discs.

With a standard retail price of $124.98 USD or local equivalent, this is pricier than your standard complete collection release of a show this length. But in addition to having the episodes spread out across more Blu-ray discs, Your lie in April’s complete Blu-ray collection will also include a small collection of physical and digital on-disc goodies. These include:

Based on the manga of the same name by Naoshi Arakawa, Your Lie in April was animated by A-1 Pictures. The 22-episode show was directed by Kyohei Ishiguro (Occultic;Nine) with series composition and screenplay by Takao Yoshioka (Wagnaria!!), the series features music by renowned composer Masaru Yokoyama (Fate/Apocrypha, Fruits Basket) and character design by Yukiko Aikei (Accel World).

About Your Lie in April

Your lie in April, the hit series based on Naoshi Arakawa’s award-winning manga, will finally be available as a complete Blu-ray set! Ever since its original release in 2014, this beloved series about youth, music, and romance still touches the hearts of audiences the world over, and now you can bring it home to enjoy all over again.

Kousei Arima was a genius pianist until his mother’s death robbed him of his will to play. Since that day, Kousei has lived a dull, empty life. However, when he meets a peculiar violinist named Kaori Miyazono, her independence, carefree attitude, occasionally short temper, and eccentric playing style fascinate the former musician. His monotonous life is about to change forever.

They may feature two very different gothic lolita style of combatants, but the universes...

Coinciding with the Australian home video release of KonoSuba Season 2 on Blu-ray, streaming...

In a new addition to the service for their premium subscribers, Australian and New...