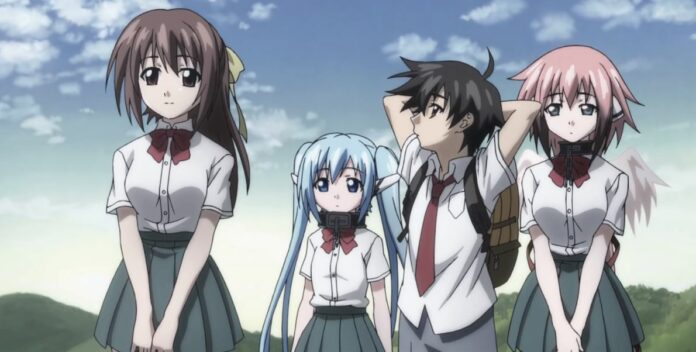 In a new addition to their AnimeLab video-on-demand streaming service earlier today, Australian anime publisher Madman Entertainment has begun streaming the 2014 feature film Heaven’s Lost Property Final: The Movie – Eternally my Master. The entire 50 minute feature can be watched with the original Japanese dub by Premium Subscribers to the service. If you are one such person, click HERE to begin watching.

This announcement from Madman Entertainment comes as quite a surprise. Although once managing the distribution of both Heaven’s Lost Property (Sora no Otoshimono – そらのおとしもの) anime seasons, their licenses appear to have lapsed and neither are available to purchase or watch physically or digitally. The only relic of the series being licensed on their website is a handful of wallpapers. Here’s hoping the series is due to make a digital return to AnimeLab sometime in the future, as while in some ways your typical harem series, it features likable characters, an enjoyable narrative and some of the greatest attention dedicated to endings sequences.

As its title should imply, Heaven’s Lost Property Final: The Movie – Eternally my Master serves as the conclusion to the series’ anime adaptation. Beautiful and otherworldly Ikaros’ connection with Tomoki is deeper than she originally thought. Now she’s starting to feel empty and confused—with new emotions she’s not had much experience with. How will she pick up the pieces after what comes next?

This coming Tuesday (5 October 2022) is the day that Australian anime publisher Madman...