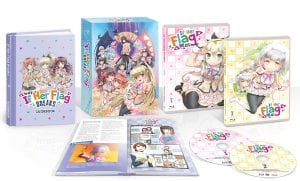 Closely following their release of The Pilot’s Love Song, North American video game and anime publisher Nippon Ichi Software America have confirmed the release of their Premium Edition set for If Her Flag Breaks (Aka. Kanojo ga Flag wo Oraretara / 彼女がフラグをおられたら).

This is a Blu-ray exclusive set, which includes all thirteen episodes of the series with its original Japanese dub. Unlike a small number of anime projects by NIS America such as A Lull in the Sea and Toradora, there have been no announced plans to commission and English dub of If Her Flag Breaks.

Those who purchase this Premium Edition set (MSRP: $64.99 USD) will obtain not only the 13-episodes across two Blu-ray discs, but also a 64-page full-colour hardcover artbook (With character art, sketches, behind-the-scenes manga and interviews with the cast and crew), a collection of on-disc extras and an artbox to store everything in. What’s on offer is pretty much the standard NIS America Premium Edition haul.

About If Her Flag Breaks

Sota Hatate is a new student at Hatagaya Academy. His cold and impersonal manner draws the attention of Nanami Knight Bladefield, a princess of a European nation, and she confronts him about it. He reveals that he is the only survivor of the sinking of the cruise ship Premium Ambriel. On that tragic day he received a special power from a mysterious stranger: the power to see people’s fates in the form of flags sprouting from their heads.

Some flags are simple things like “friendship” flags, but others are more ominous, like “death” flags. Over the next few days, more and more classmates and friends are drawn to him and live with him at the Quest Dorm, and Sota must occasionally use his powers to alter their fates. He and his new friends and dormmates get up to all kinds of fun adventures. However, he eventually discovers that there is more to his power, and the world itself, than he realized…