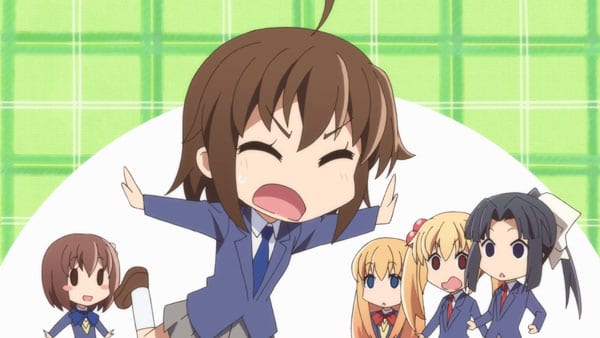 Continuing to look towards their anime releases for 2015, North American anime publisher Nippon Ichi Software America have confirmed that they now hold the rights to Chronicles of the Going Home Club – also known as Kitakubu Katsudou Kiroku (帰宅部活動記録) in Japan.

This 12-episode 2013 slice-of-life comedy series will be released on March 3rd 2015 as part of a Premium Edition release, exclusively on Blu-ray. This edition will be bundled with the usual assortment of goodies including a hardcover artbox, approximately 64 page full colour artbook and a handful of on-disc content. It is currently priced at $64.99, with no word on when a cheaper standard edition will be available.

It’s the beginning of a new year of high school, and school clubs are diligently recruiting members to take part in their activities. However, Natsuki Ando has decided to join the “Going Home Club,” a fictional club which students who have no club affiliation and simply go home right after school jokingly claim to be members of. However, Natsuki and her new friend Karin soon discover that this particular school has a real, bona fide Going Home Club! Teaming up with club members Claire, Botan, and Sakura, the official unofficial Going Home Club gets up to all kinds of kooky trouble and hilarious fun!