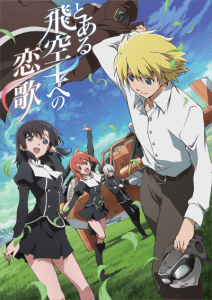 North American publisher Nippon Ichi Software America have announced their acquisition of anime series “The Pilot’s Love Song“, sequel to the light novel and film The Princess and the Pilot which they released as part of a Premium Edition set early last year.

While there will be a Premium Edition release down the track at an unspecified date, you can currently opt to forgo the purchase and instead check out the series as it airs on the CrunchyRoll online streaming service.

The Pilot’s Love Song features direction by Toshimasa Suzuki and series composition by Shinichi Inozume and Reiko Yoshida. The Japanese dub (which will more likely than not be the only one included in an eventual physical release) features the talent of Natsuki Hanae as Kal-el Albus, Aoi Yuki as Claire Cruz, Ayana Taketatsu as Ariel Albus and Kaito Ishikawa as Ignacio Axis.

Synopsis of The Pilot’s Love Song

In order to uncover the “end of the sky,” as spoken of in ancient mythology, Kal-el Albus is sent to Isla, an island in the sky. There he attends Cadoques High’s Aerial Division, where he enjoys a carefree life with his schoolmates. That is…until a surprise attack by the air tribe drags Isla into a bloody war.