Australian anime and special interest title publisher Hanabee Entertainment have today announced that two very special Rooster Teeth guests will be travelling around Australia during the month of November, including at both Supanova Expos and a special session in Melbourne.

The company will be playing host to Rooster Teeth’s Monty Oum and Jordan Cwierz. They will be making their first appearance in the “Merry Ol’ Land of Aus” at both Brisbane and Adelaide Supanova events, happening on the 8-10th and 15-17th November respectively.

Mony Oum is the Director of Animation for Rooster Teeth, and has been hailed as one of the most original action choreographers and animators working today. Prior to creating the exciting and elaborate fight sequences for Red vs. Blue, Monty created the online hit series Dead Fantasy and Haloid. He is currently directing Rooster Teeth’s first anime series, RWBY. Jordan Cwierz is the creator and animator of the popular Rooster Teeth Animated Adventures. He started out as a fan making the animations fro fun, and after being discovered by the staff, Jordan was hired full time to work on the production team. Jordan has also appeared on the Rooster Teeth Podcast, RT Recap, and various other productions. Both Monty and Jordan will be doing signings at the Supanova events, so don’t miss your chance to meet these two animation gurus and get yourself signed copies of Rooster Teeth’s latest releases! 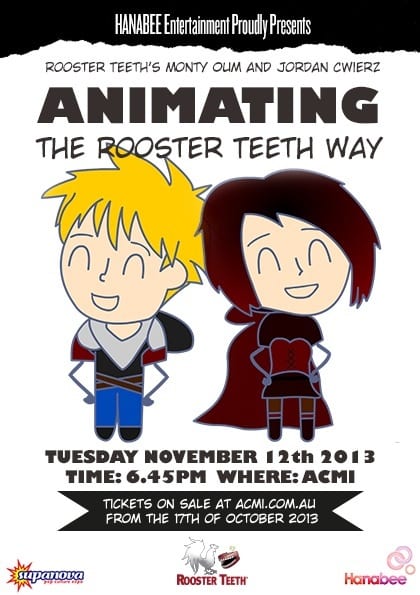 Not attending either of the events? If you will be in Melbourne on the 12th November 2013 you won’t have to miss out. The Hanabee team have also confirmed that both Monty and Jordan will be appearing in the city for an exclusive live talk at the ACMI at 6:45PM. Information on this event is available on the image above.