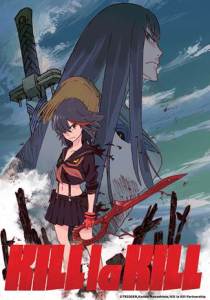 Australian anime publisher Madman Entertainment have this afternoon confirmed their acquisition of the anime series Kill la Kill, set to be simulcast through the Madman Screening Room service for anime fans residing in Australia and New Zealand.

In a first for Madman Entertainment’s Screening Room streaming service, KILL LA KILL will stream online and in simulcast, day and date, with the Japanese TV broadcast on the 3rd October 2013. In the past there has generally been some delay in getting the first episode out to the audience.

Ryuko Matoi wanders the land armed with a single red Scissor Blade and a single objective, to find and exact vengeance upon the one who wields the matching blade… her father’s killer. When she arrives at Honnoji Academy, a high school living in fear of its belligerent student council rulers, Ryuko stands against them in an effort to liberate school their iron grip and find out the truth behind her father’s murder.

The digital release will be followed up by home video release at an unspecified time in 2014 as well as distribution through other digital channels..

We are thrilled to be working with Aniplex to bring this series to Australian and New Zealand fans within hours of its Japanese debut. Madman is very focused on giving local fans what they want, which is resoundingly the hottest content as soon as possible. This represents a new milestone for Japanese animation in our part of the world.

Not only was Demon Slayer -Kimetsu no Yaiba- The Movie: Mugen Train the highest grossing cinematic release of all time in Japan, but also...
Read more
Anime

Joining a growing list of anime in the "Anime I didn't expect to see ever licenced outside Japan, but acquired by Sentai" category is...
Read more