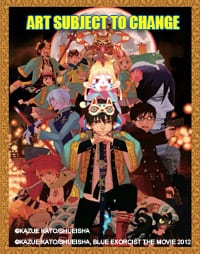 While many companies might end their release plans following a subtitled DVD-only release, Aniplex of America have been turning this year into a big one for Blue Exorcist fans. So far this year they have begun publishing an English dubbed release of the TV anime series, screened its feature film in cinemas across North America and as of today confirmed that the film will be available in a couple of different sets by the years end.

At their Anime Weekend Atlanta industry panel, the company announced their home video release plans for Blue Exorcist The Movie in North America on the 17th December 2013. This title will be available in both a Limited Edition Blu-ray box set and a standard (albeit cheaper) DVD release.

Both releases will feature both Japanese and English dubs, while the blu-ray set will also include two commentary tracks by the creative staff and the Japanese voice cast alongside promotional trailers. It will also include the feature film on a Blu-ray disc, a Bonus DVD featuring an Exclusive Staff Interview, a Deluxe Booklet, along with some Exclusive Illustration Postcards all encased in a rigid box illustrated by the original manga author Kazue Kato.