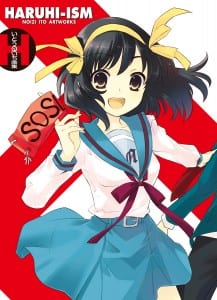 Following a formal release earlier in the month, the publisher of English localized artbooks – Udon Entertainment – have released a series of sample images for their latest release: Haruhi-ism: Noizi Ito Artworks.

As the title implies, this 120 page colour book features artwork based around The Melancholy of Haruhi Suzumiya anime franchise produced by the original light novel’s illustrator Noizi Ito. The book comes in at $39.99 for a hardcover copy with the dimensions of “8.25” wide and 11.75″ long.

Haruhi Suzumiya is an energetic Japanese girl who craves excitement and adventure! The members of the SOS Brigade try their best to keep Haruhi happy, because if they don’t… she could accidentally destroy the universe! Seriously!

Haruhi-ism collects the spectacular artwork of Noizi Ito, the artist of the original Haruhi Suzumiya novel series. Included are all of the book & DVD covers, magazine pinups, and rare promo images by Noizi Ito that kicked off this international phenomenon. As a bonus, Ito also provides commentary on every illustration in the book, and includes a special note to fans about her feelings working on these illustrations! So cool!