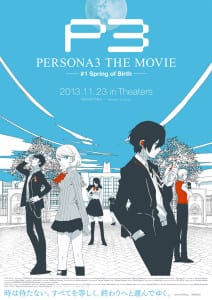 While Megami Tensei spin-off titles Persona 4 and Devil Survivor 2 have received anime adaptations over the last couple of years, Persona 3 which originated on the Playstation 2 is set to receive the big screen treatment through a series of feature films. It has been confirmed today that the first of these films titled Spring of Birth is set to arrive in cinemas around Japan on the 23rd November 2013.

The films are being produced by the animation studio AIC A.S.T.A. whom were also behind Persona 4 the Animation with direction by Noriaki Akitaya, supervision from Seiji Kishi and Music by Shoji Meguro who has been behind the music of both Persona 3 and 4 video games. Also as they like to juggle around names for the protagonist, the name they seem to have chosen is Makoto Yuki.

Makoto Yuki was orphaned as a young child, but returns to the city of their childhood. Shortly after transferring to Gekkoukan High School, he is attacked by Shadows – creatures that feed on the minds of their victims. The assault awakens his Persona, Orpheus, who is the only chance at defeating these creatures of the night. He soon discovers that he shares this special ability with other students at his new school. From there he learns of the Dark Hour, a hidden time that exists between one day and the next, swarming with Shadows. He joins the Specialized Extracurricular Execution Squad (SEES) and confronts the evil threat that could potentially mean the end of the world if they fail.

Oh, and we have a new trailer to boot!