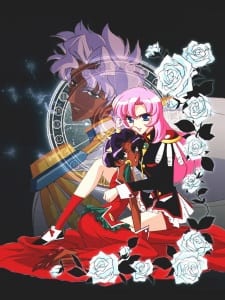 Australian anime publisher Hanabee Entertainment have a couple of titles up their belt for this weekend’s Supanova: Pop Culture Expo held in Sydney, New South Wales. These announcements are to be made over the two weekend sessions – with the first being Revolutionary Girl Utena (Shoujo Kakumei Utena |少女革命ウテナ), a classic anime series which was originally aired in Japan during 1997.

This series contains a total of 39 hybrid (English + Japanese) dubbed episodes which are to be split over three individual releases over September, October and November 2013. All three releases will be housed in a collector’s box with a detailed booklet about the series – with the first set specifically containing the 12 episodes of The Student Council Saga. Despite the series’ age, this will be the first time it has hit Australian shores.

A chivalrous pink-haired adventuress will revolutionize the world!

“Never lose that strength or nobility, even when you grow up.” When Utena was just a child and in the depths of sorrow, she found salvation in those words. They were the words of a prince, who wrapped her in his rose-scented embrace and bestowed upon her both a ring and the promise that it would lead her to him again. She never forgot the encounter. In fact, she was so impressed that she aspired to be like the prince and also help those in need.

Now a spirited teenager, Utena attends the prestigious Ohtori Academy. However, her strong sense of chivalry soon places her at odds with the school’s student council and thrusts her into a series of mysterious and dangerous duels against its members.

There was also another announcement that was made today….. which you can read up on in the next article I will have up in a few minutes.