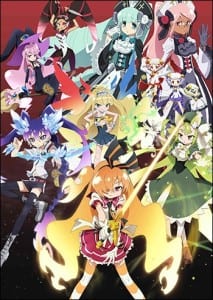 Aniplex of America have been charging ahead with acquisition announcements for series set to debut on television screens next month in Japan. The company have confirmed another title will be joining this set – il sole penetra le illusioni ~ Day Break Illusion – a brand new anime series directed by Keizou Kusakawa of Magical Girl Lyrical Nanoha acclaim. This series will be simulcast mere hours after it initially airs in Japan, and of course has a home video release edition planned – although details on this release is very limited.

Since ancient times long past, this world has been ruled by two types of tarot cards. The Diablos Tarot—The tarot of the devil that feasts on the souls of living humans and uses that nourishment to bring countless pain and suffering. The Elemental Tarot—The tarot that draws its energy from the power of nature in order to oppose the Diablos Tarot. Girls chosen from 22 different bloodlines become the wielders of the Elemental Tarot, plunging themselves into this secret battle against the Diablos Tarot. These girls maintain the balance of this world, while carrying unbearable guilt… Are they executioners? Or are they saviors? This is the story of the long, long battle fought by girls who cannot escape the fate they bear.