The Princess and the Pilot Premium Edition Launches in North America 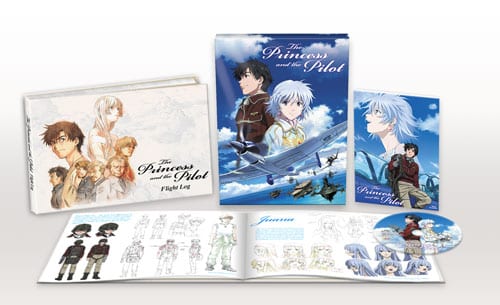 While a bit of a different anime title from the company, Nippon Ichi Software America have today launched their premium edition release of The Princess and the Pilot anime film to North American retailers. Also known as To Aru Hikuushi e no Tsuioku (とある飛空士への追憶), this is an anime release that they hope will bring both aerial battle sequences harmonized with a heartrending love story. The story follows two people from very different social backgrounds—a talented young fighter pilot and the princess of the Levamme Empire. Their journey across the ocean together sparks a unique relationship, and the exciting battle scenes will pull you in like no other.

While this is only a film release, it still comes with all the normal extras you would expect from the company – a hardcover artbox, a hardcover artbook and a number of on-disc goodies to enjoy after watching it. Unfortunately for DVD-only users however, this release is only available on Blu-ray. Overall this set will cost you back around $44.99.

The war between the Levamme Empire and the Amatsukami Imperium has been raging for years. In the midst of this struggle, the prince of the Levamme Empire declares his love for Juana del Moral and vows to end the war in one year, as part of his marriage proposal. When the Amatsukami catch wind of this, they assault the del Moral residence, targeting Juana’s life. As a last-ditch effort to bring the prince his bride, the San Maltilia Airforce employs a mercenary of mixed blood—a bestado—to fly Juana to the prince in secret. The pilot, Charles, accepts the mission…but traversing an ocean alone, and into enemy territory, proves a much more dangerous ordeal than anyone could have anticipated.