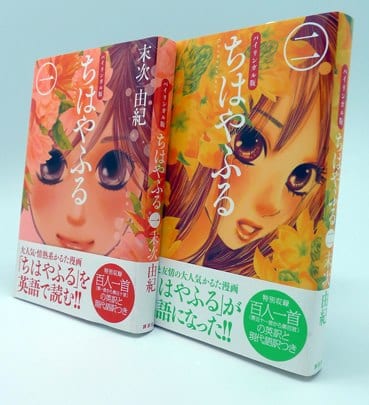 Australian anime publisher Siren Visual have open pre-orders up for their first collection of the anime series Chihayafuru, set to contain the first 13 episodes in the series and be in stores from the 18th July 2013. As with some of the companies other more unique licensed titles such as Welcome to Irabu’s Office and Dennou Coil, this title is at this time an English-language exclusive release for the company, although is available via streaming through services such as CrunchyRoll.

But you may be wondering why to the left of this text is an image of the manga volumes!?! Well, as an added bonus for the early-birds who pre-order the title via the companies official website, you will go into the running to win a Chihayafuru manga set. Only seems like there will be one winner at this time – but you gotta be in it to win it!

Chihaya Ayase is a frank and ebullient  girl who becomes fascinated by the obscure world of competitive karuta, a card game based on Japanese poetry. Introduced to the aggressive style of the game by a quiet and thoughtful elementary school classmate named Arata Wataya, the two quickly become close friends.

They start playing as a group with Taichi Mashima, Chihaya’s smart and athletic childhood friend, until they have to part ways during their middle school years due to several circumstances. As their high school life begins, they meet once again.