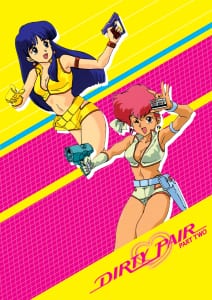 Seems like August 2013 is a hot month to release second parts of series, with Nozomi Entertainment – an anime publishing wing of Right Stuf announcing their intent on releasing the second “value-priced” collection of Dirty Pair: The Original TV series on the 6th. This new set repackages the final 13 episodes of the Dirty Pair television series – featuring the remastered video from the Japanese home video release and previous Nozomi release – with Japanese audio, English subtitlesand English on-screen translations, along with on-disc extras.

For Kei and Yuri, no two missions are ever the same. As the WWWA’s top Trouble Consultants, they take on all sorts of odd jobs, like chasing down treasure in high-tech ruins, fighting off political assassins, even avenging the death of… a plaster statue!?! In the end, only one thing’s for sure: Anything that stands between these two and victory is sure to be destroyed! Includes Episodes 14-26.