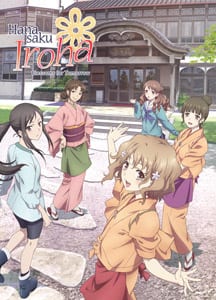 Who is up for another NIS America anime release? Nippon Ichi Software America have announced that their first volume premium edition release of Hanasaku Iroha ~ Blossoms for Tomorrow ~ is now available for purchase in North America. Coming with both Blu-ray and DVD media formats, this collection contains a number of the same bonus goodies you would have come to expect from the company – a hardcover artbook, a hardcover artboox and a number of other on-disc goodies such as clean opening and ending sequences.

Available from a number of outlets, the MSRP for this title is $69.99. No Standard Edition release has as of yet been confirmed.

Ohana was living a normal high school life in Tokyo until her mother ran off with a debt-dodging boyfriend and sent her to live with her grandmother, who owns a rural hot spring inn called Kissuiso. Thrust into a life where the customers always come first, Ohana struggles to find her place at the inn and fit in with her fellow coworkers. Yesterday, Ohana was an ordinary high school student. Today, she’s an attendant at a hot spring inn. Tomorrow, will she bloom…?