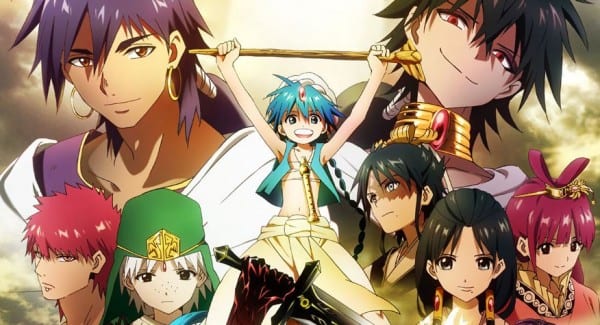 Aniplex of America have recently announced the simulcast details for one of their recently acquired anime series, Magi. The  TV series will premiere on Hulu.com, the Hulu Plus subscription service and via the Crunchyroll service. The multi-stream simulcast premiere will be distributed in the US via Hulu and Crunchyroll, and will also be available for streaming in Canada and South Africa through Crunchyroll. The 1st episode (English subtitled) will premiere at 10:00am PST on Wednesday, October 10th, three days after its initial airing in Japan on Sunday.

Set in a mythical world of filled with magic and flying carpets, MAGI follows the story of a young boy named Aladdin as he travels to a mysterious continent that is home to a cryptic ruin known as the “Dungeon”, in which great treasure is said to lay hidden. Aladdin will go on a quest to clear the “Dungeon” in order to claim the treasures within. As his quest brings new encounters and farewells, Aladdin will come to learn of his true destiny

Hideki Goto | President of Animation Business at Aniplex of America

We’re looking forward to utilize digital media distribution in showcasing MAGI to as many fans as possible. It’s exciting to be able to simulcast MAGI and enjoy this series nearly the same time as it airs in Japan. MAGI is a highly anticipated title for Aniplex and I hope many viewers will enjoy this fantasy adventure.