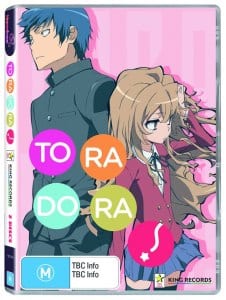 To be fair, this may not be of as much interest to some of you… but if you are one who likes to make DVD covers look all pretty on DVD racks, cabinets or (in my case) bookshelves, this may be of some interest. Hanabee, a brand new Australian distributor of anime to the Australian market headed by former Siren Visual CEO Eric Cherry announced a short while back that they had acquired the license to Toradora and would be releasing it this October.

Through their Facebook page today, Australian anime retailer OzAnimart posted up the image to the left – providing us our first look at what a DVD case of Hanabee’s may look like.

In addition, Hanabee and OzAniMart are holding what they have listed as “an exclusive pre-release” (Source) and by pre-ordering you are in for a chance at winning a huge, limited-edition Toradora! Wall-scroll.

As we are now in the month before the companies first anime releases and where we expect to see the unveiling of the Hanabee official website – expect to hear more news in the coming weeks.

Toradora!’s story revolves around Ryuji Takasu. The sophomore high school student who is trying his best to look good. Despite his gentle personality, his eyes make him look like an intimidating delinquent, crushing his dream at a chance at any form of romance, or even simple relationships. The only happiness he got out of his miseries is that girl he has a crush on, Minori Kushieda is in the same class with him, as well as his best friend Yusaku Kitamura.

However, it is then that he unexpectedly knocks into “the school’s most dangerous animal of the highest risk level” – Taiga Aisaka – who just happens to also be in his class, and is a good friend of Minori’s. The story takes a drastic turn there when Ryuji finds out that Taiga has a crush on Yusaku. So the two plot together to help each other reach their love, and thus marking the beginning of their strange “partnership”!