Madman Entertainment to Release Towa no Quon This October 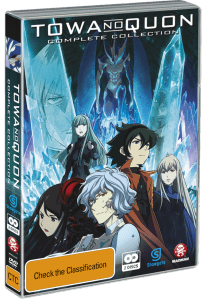 Madman Entertainment, one of Australia’s major publishers of anime titles to Australian and New Zealand markets are currently set to be releasing the complete anime series Towa no Quon this October. This follows on from the acquisition announcement of the series at Wai-Con in January this year. This will feature all six episodes each with a runtime of approximately 45 minutes, coming in at a total of 300 Minutes with both English and Japanese dubs.

Judging from the North American release which was released by Sentai Filmworks late last month, the only noted Special Features which may be included are staff commentary.

A Wild Dance of Chaos
In the not-too-distant future, children are being born with special powers; marvelous and remarkable abilities. But what would seem like a wondrous gift turns out to be a dangerous curse. The world is now run by The Order, and these miraculous “deviants” are hunted down and killed. Quon and his group of Attractors are out to rescue these children before The Order’s elite squad of ruthless cyborgs detect them. From their hideout beneath a popular amusement park, the Attractors use high tech gadgetry and their own remarkable abilities to save these children. They teach them to harness and control their powers to overthrow the very powers that seek to destroy them. Contains episodes 1-6.