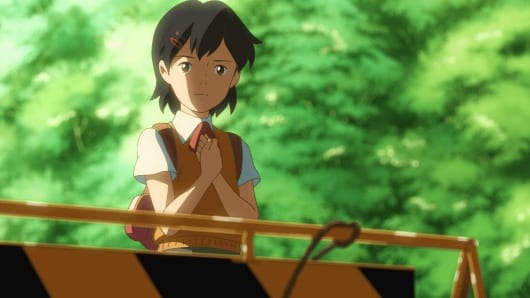 This weekend the Supanova Pop Culture Expo has come to Sydney, and with it came Madman Entertainment’s obligatory panels and bringing with them brand new acquisition announcements of anime series and films. This time around the company announced three very exciting film releases… all of which will be part of their Reel Anime 2012 festival in September. These titles are as follows:

Children Who Chase Lost Voices from Deep Below

One day, a girl named Asuna hears a mysterious song on her crystal radio, a memento of her father. She is never able to forget it, as it sounded almost like someone’s very heart itself made into song.

On the way to her favorite mountain hideout she is attacked by a strange beast and is saved by a young man named Shun. Coming from a faraway land called “Agartha”, he tells her he came to the surface because he wanted to meet someone, and had something he wanted to see. The two begin to open their hearts to each other, but Shun suddenly disappears and Asuna is not able to find him. It is then she hears the terrible news… Asuna refuses to accept it, and in school she learns of the mythological underworld from her new homeroom teacher, Mr. Morisaki. One of its many names is Agartha, a place where secrets of the world are hidden and any wish you have may be granted. Just then, a boy who looks just like Shun appears before Asuna being chased by a number of suspicious men. The men are after his Clavis, the key to Agartha. Driven into a corner, the gate to Agartha finally opens up before Asuna and the boy. There, Asuna learns that the leader of the men is actually Mr. Morisaki who has been searching for Agartha in hopes of reuniting with his late wife, and the boy, Shin, is Shun’s younger brother.

With the entrance to Agartha before her eyes, Asuna makes up her mind: “I want to see him, once again.” Asuna, Mr. Morisaki, and Shin, each with their own feelings in their hearts, set out on a journey into a land of legends….

I have plenty of information on this title as well as a theatrical showing review, all of which can be read on my “Children Who Chase Lost Voices from Deep Below” tag

The theme of the film is the love between parents and children. The story covers 13 years and begins with a 19-year-old college student named Hana who encounters and falls in “fairy tale-like” love with a “wolf man.” After marrying the wolf man, Hana gives birth and raises two wolf children — an older sister named Yuki who was born on a snowy day, and a younger brother named Ame who was born on a rainy day. The four quietly lived in a corner of a city to conceal the existence of the “wolf children,” but when the wolf man suddenly dies, Hana decides to move to a rural town far removed from the city. (Source: AnimeNewsNetwork)

As I haven’t seen this film yet, I dont have a review of it however I do have a trailer I previously shared on this film which can be viewed HERE.

From Up on Poppy Hill

The 1964 Tokyo Olympics represented a new start for Japan — out with the old Meiji-era buildings that reminded citizens of bad times, in with innovation that spoke to the future of a newly peaceful and increasingly prosperous country.

Umi, a shy teenaged girl, manages a boarding house on the Yokohama seaside. Her father was killed in the war and her mother travels constantly, so in addition to attending high school, Umi must also run the family business. Her classmate Shun, an orphan unsure of his lineage, lives with a few other students in the old high-school clubhouse, a French-style, mansion that’s set to be demolished as part of the current modernization project. Shun and his schoolmates refuse to let this happen.

As much as they fear losing their shelter, they are also appalled at what they see as the erasure of their history. As the students organize a protest, Shun and Umi grow closer. What begins as a friendship develops into something deeper as these two lonely teenagers find a mutual understanding and trust. Yet when Shun starts to investigate his past, secrets emerge that threaten to tear the two apart.